Glasgow’s recently completed and much talked about “bridge to nowhere” is a new addition to the city’s walking and cycling infrastructure.  I had yet to even see this piece of engineering simply because it is nowhere near either of my main commuting routes to work in the Cowcaddens area of Glasgow. So it was that I set out on a Sunday morning to seek out this track with a destination in the west end in mind; here is how I got on.


I knew that the new section of cycleway started at the Central Station end of Waterloo Street at the junction with Hope Street, presumably with the train/ bike commuter in mind. I did not join it exactly at this point, having come in along the Victoria Road shared lane with buses and taxis which is practically deserted on a Sunday morning. 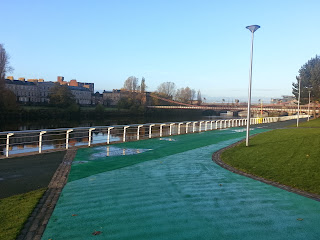 At the Clutha pub I turned left and joined the recently refurbished section of the Clyde walkway opposite Calton Place heading west and passing maybe half a dozen people cycling the opposite way towards Glasgow Green and to...well who knows, the velodrome or just along the walkway for a social ride perhaps.
While nothing to do with the Connect2 project, the walkway is now looking rather good, and certainly at this early hour was quiet and free of winos and rowdy kids. The one thing I have heard consistently over the years about travel by bicycle is that it has the ability to put you in the moment; you definitely do appreciate much more of your surroundings on a bicycle than when stuck in a car. 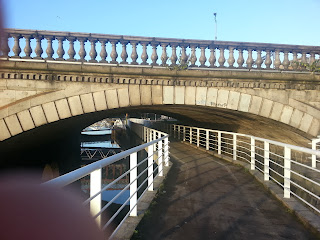 Negotiating the deceptively low bridge passing under the road I emerged unexpectedly onto some cobbles that led me to a choice of continuing over and back onto the walkway, or to rejoin the road parallel. I chose the road and a few moments later made a right and left turn which led me to the cycleway in Waterloo Street. 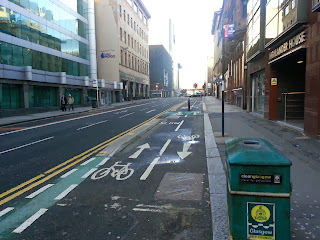 On a deserted Sunday morning devoid of delivery lorries and white van man it was possible to get a proper look at this piece of engineering. The temptation with anything like this is to simply say thank you kind sirs and meekly go on with daily life, but having ridden a bicycle for the sole purpose of getting around in Amstelveen and Haarlem in Holland, I could not help but wonder if the person who came up with the design had ever seen let alone studied the segregated bike paths in Holland?  I did not have a tape measure, but it did not feel wide enough to accommodate a great volume of two way traffic. Maybe I’m just being picky, I moved off and noticed immediately the drain covers and curiously positioned bollards in the lanes. 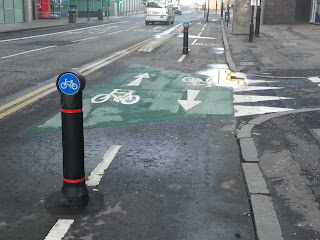 Two things spring to mind here, firstly the bollards are black, maybe I’m being picky again but perhaps white with some reflective stripes would have been better, but wait, why are they even there? Surely they would be better spaced along the separating strip next to the double yellow lines to reinforce the idea of the lane being segregated. Anyway I’m nitpicking again, within a few minutes I had reached the end of the segregated cycleway and landed on a short section of shared use path. The main carriageway carries straight on to the M8 at this point while pedestrians and cyclists cross together at traffic lights and head up the ramp onto the bridge over the M8 motorway. There is no photograph of the crossing as it was completely blocked by a road maintenance lorry. 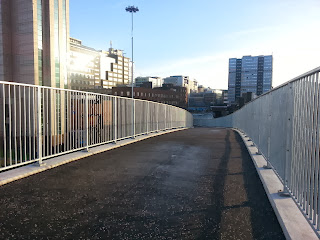 The bridge is a superb construction, sweeping over the multiple lanes of traffic beneath and providing fast, safe access to the Anderston/ Woodside borderlands. Underfoot or underwheel the surface feels quite secure even on a damp morning like this was, it was absolutely fine, hopefully this will still the case in icy conditions. 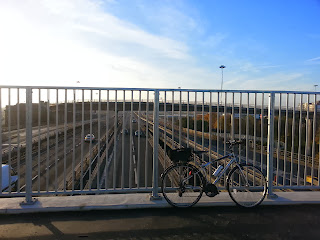 Intriguingly there exists another partially completed bridge at the other end of which I know absolutely nothing except it appears to be actively under construction and would provide a link from the new bridge over to the south side of the clydeside expressway, a nasty 50 mph A-road, effectively an urban motorway, that no right minded cyclist would venture on to. 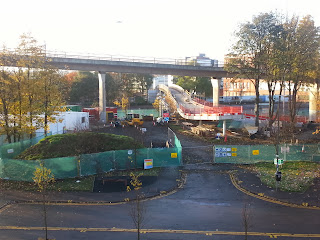 The drop down from the bridge is not too steep but care had to be taken at the very bottom due to the slippery carpet of leaves, a seasonal hazard. A little to the left of the bridge exit was a path that seemed to be used by pedestrians and cyclists alike, this led to a wide pavement that eventually stopped at the Skypark technology building and then...well that is really it. 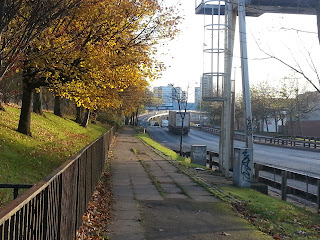 The so-called bridge to nowhere, a nickname I have never heard used by anyone bar the media, is in itself a fine construction but ultimately, and hopefully only temporarily, is now a bridge to nowhere of much consequence. What would be nice would be for the west exit to connect up to some high quality, traffic calmed paths that would lead into the west end proper. I am hoping that this is part of a greater plan to connect the city centre to the west end for pedestrians and cyclists. We can but hope...or campaign in earnest.


Posted by Assisted Pedestrian at 11:08